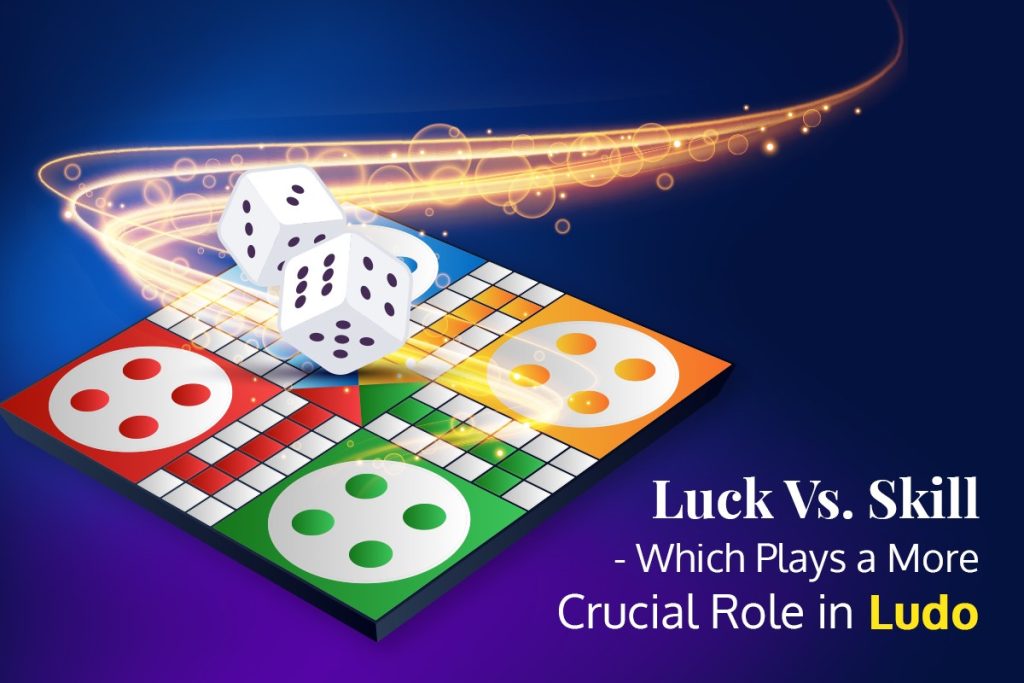 Ludo is the most loved game by the majority of people in India. People enjoy playing as it is easy and does not involve many complex rules. As a result, people find it quite comfortable to play Ludo at family gatherings, and it is the go-to game for people of any age.

The popularity of Ludo stretches from the time of Mahabharata as cave carvings indicate the game being a huge craze in ancient times. Speaking of modern Ludo, during the pandemic, the game became popular among the people and rose to the top of the app store, positioning itself as the top game in 2021. However, people have often wondered how to win at Ludo, and there have been long debates on it being a simple game of luck rather than a board game that also utilizes the player’s Skill.

Let us look at some of the hard facts to decide what determines victory in Ludo. Is it Luck, or is it Skill, read below to find out.

To play Ludo, you need a dice to get numbers that help you open and move the pieces across the board. Shuffling the dice in a holder or your palm counts as an element of luck involved in the game, as the player does not have a chance of predicting what number would eventually land on the board and how that will affect their game. Therefore, one can never become a pro at throwing the dice. No matter how well you shuffle the dice or whichever angle you throw it on the board, the numbers are completely random and therefore unaffected by your Skill or capability. Once you get the random number on the board, then you can think of choosing how to utilize it. For example, you might owe it to Luck if you get continuous good throws and get fives and sixes in the beginning and get ahead of your competition, or the complete opposite could happen where you cannot open your pieces due to low numbers crowding at the start of your game.

When you get the numbers from the dice, your job is to use them to move the pieces around the board. In the initial moment of the game, you need not put much thought into where to push your pieces; instead, you should keep pushing all of them ahead, keeping at least one close to home. After the other players have unlocked their pieces, you have to strategize your moves and think about where you can push the pieces to get the perfect setup lest rivals from the back try to capture your pieces ahead. After letting some pieces reach halfway across the board, the player should distribute their dice values across the pieces on the board so that the opponent is confused about what next move they are about to play. This way, you can stay ahead in the game and improve your chances of winning.

This is a modern myth that has circulated in the Ludo playing realm, where people tend to think that the choice of color impacts your style of playing. So, for example, it might happen that players choosing a certain color are winning matches back to back. Still, it is up to the ability and partially Luck on the dice contributing to the gameplay. Game myths like these often contaminate the player’s minds, so they need to be focused and not be deluded by superstition and false facts.

The online game of ludo is centred around a strong display of skill. This shows how Ludo is inclined to become more of a skill-based game. You do not need to use dice; the number you will play is assigned to you automatically by the in-game mechanics. After getting the number, you have to choose to play the token of your choice. One key fact of playing online ludo is not to move a single piece at all times. It would help if you directed the chances you get towards all pieces. Every move forward increases your score, and capturing the token of your rival awards you bonus points. Here, you have the complete ability in your hand to win points and augment your score in the game, which eventually helps you to win. The number of moves you get for each match is predetermined, so you must measure each turn you play as the game gets over once players run out of preset turns.

The online version of Ludo is time-bound, so you have to make your choices fast. Both you and your rivals are permitted a limited time after you have played the dice to choose which piece to move. This added feature that helps get more players on the app also makes you think on your feet, and if you make a few bad choices, then chances are that you would lose. Acting within the timeframe forces you to be creative and logical, diminishing the power of Luck affecting your gameplay.

Though some factors of playing Ludo are based on Luck, the game remains primarily about Skill and ability. Ludo players must keep observing the board and thinking about moves and loopholes where they could slide and make safe bets to move into the final winning grid gradually. Local myths have given rise to the rumors of the game being about Luck, but Skill is still the crucial factor of Ludo and strictly dominates the player’s fate and outcome of the game.